Investiture in the Order of St Lazarus 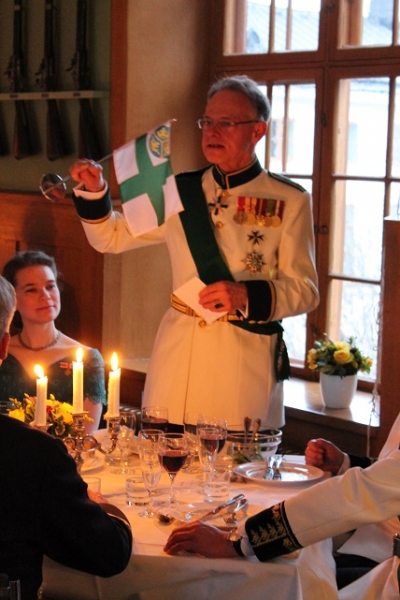 Saturday the 4th of May the Swedish Priory together with the Norwegian and the Danish priories celebrated a ceremonial investiture at Karlberg Palace in Stockholm. The day before we attended a lovely vigil in the Odd Fellow Palace. An investiture, especially when it is held in at Karlberg which is the oldest, still running, military academy in the world, is a very special happening. The heritage is profound, the palace a jewel and most members in The Swedish priory, 70%, have their background within the Swedish Armed Forces. So all those attending have a certain level of humility when they via enter the majestic staircase.

Normally the service is held by our Spiritual Protector Bishop Christina Odenberg but this particular day she unfortunately had business elsewhere. The service was held by Pastor Per Arne Rudberg AND Pastor Jerker Schmidt. This, I must say, was a nothing but wonderful as Pastor Per Arne was my priest who gave my sending service in the crypt in the Cathedral in Lund. He is such a wonderful man and Pastor Jerker managed to attend as well as he recently got back from a peace keeping mission with the Swedish Armed Forces. He is a distinguished officer as well as well as a priest!

During the investiture I was in for a surprise! Behind my back the British Priory, the Delegate of the Holy Land and the Swedish Priory had worked hard to make it possible to honour me with the decoration Officer of Merit! I was truly baffled and it took me a while to actually understand that I had been presented with this honour!

After the investiture we all had a delicious evening supper. H.E. Count d´Évora, who is the Heraldry Principal of the Order, presented two smaller versions of the the Swedish Priory´s almost brand new flag which is designed by the honourable Count himself. He also took the opportunity to give a short lecture on heraldry in general. Meeting the Count again, after he so generously accomodated me in his home in Meursault, France,  during my pilgrimage was a dear moment for me.

The night ended with a proper ball, including a genuine brass band, and of course lots of laughs and good stories! I can´t really wait until the next one! This annual gathering has a long history and carries a heritage making it the most important gathering throughout Scandinavia for the Order.